“Of note in the second half were performances by Aliéksey Vianna of Arthur Kampela’s Percussion Study No. 1 and the New York premiere of Sérgio Assad’s Fantasia Carioca. The percussion study was suggestive of MacCombie’s Nightshade Rounds in its gradually shifting patterns; it included a variety of unconventional percussive effects (one, for instance, sounded like a swarm of bees). The composer was in attendance. The performance of the Assad piece was flawless in both its musical expression and technical execution. The piece can be heard on Vianna’s new CD, Aliéksey Vianna Plays Sérgio Assad.”

“I think that he is an exceptionally talented artist; his technique, musical understanding and sensitivity easily place him among the best guitarists of his generation. Apart from his accomplishment as a classical musician, he is also an extraordinary improviser.”

“Aliéksey Vianna is a very talented musician – fully dedicated to his work and greatly committed to his art. He has put a lot of energy into this project and we can all feel the reward. I’m pleased to have my entire solo guitar production to this date, represented here by him and I hope to write more solo pieces in the future.”

Sérgio Assad (from the liner notes)

“…impeccable guitar playing which is delivered with the rare balance of poise, grace, and raw emotion. With this disc I offer my highest recommendation as Vianna has conceived a recording that not only offers striking music accessible to all guitar music listeners, but which also compiles for guitarists the much-needed collection of Assad’s highly distinct works.”

“Alieksey Vianna is at once passionate and cool – like the best of jazz musicians. The instrument never leaves his control, but one feels that if he let his guard down for one moment something quite terrifying might happen. This quiet, restrained but roiling power permeates every second of his recording of Sergio Assad’s music… To put it simply – you will find no more passionate or perfect performance of Assad’s solo music anywhere.”

“Brazilian Aliéksey Vianna took second place, playing Ginastera’s landmark Sonata with virtuosity of the most florid sort- indeed, his guitar seemed at perilous risk from the uninhibited vehemence with which he attacked percussive effects.”

“His Aguado was elegant and spirited… and the Aquarelle sparkled.”

“Aliéksey is one of the greatest natural talents on the guitar… His hands work beautifully on the instrument, and he plays in a way that makes everything sing. He also has an impeccable sense of rhythm… Aliéksey is a rare example of a guitar player who is highly accomplished in both classical and jazz”

“A marvelous concert… the clarity of ideas and musical nuances were present from beginning to end… Aliéksey brought life to each note, color and soul to each phrase, always with his characteristic clear tone.”

“Vianna brings loads of personality to his playing… making every lick come alive with polish and fire.”

“…eminently likeable, beautifully crafted works…Vianna plays them with an infectious energy. Vianna has just the right rhythmic sensibility for this music: his playing is both tight and flexible.”

“On his latest CD, the brilliant Brazilian guitarist Aliéksey Vianna explores the complete solo guitar music (to date) of his countryman Sérgio Assad, with two large single-movement pieces (Fantasia Carioca and Jobiniana No. 3) and a quartet of three-movement works. Of special note is Aquarelle, Assad’s first composition for solo guitar. Its opening movement, “Divertimento,” starts with a nod toward impressionism, mining the sonic resources of whole-tone scales before leaning into jazzy harmonies and fleet-fingered passages. Vianna reveals the lyrical side of his playing in the rapturous and romantic second movement, “Valseana.” Fantasia Carioca begins contemplatively and then shifts moods several times, putting Vianna’s chops to the test in the coda section with melodic bursts played at a brisk tempo over chordal jabs and rumbling bass lines. In Three Greek Letters, dedicated to Greek guitarist Antigoni Goni, Assad consciously avoids the syncopations that characterize Brazilian music. The disc’s closer, Jobiniana No. 3, returns to Brazilian sounds with a meditation based on Antonio Carlos Jobim’s “Desafinado.” Throughout, Vianna plays with rich tone, rhythmic intensity, and a technical facility that promise a bright future.”

“While Mr. Vianna exhibits all the technical skills of a virtuoso, he is first and foremost a fine musician with a repertoire that encompasses jazz and music of his native Brazil. He has performed globally with orchestras, string quartets and other ensembles. On the review disc Vianna demonstrates strong understanding and empathy for the music and this is never compromised because his technical command is so robust. As one may anticipate he conveys a sense of enjoyment associated with music for which he holds such a high regard.” 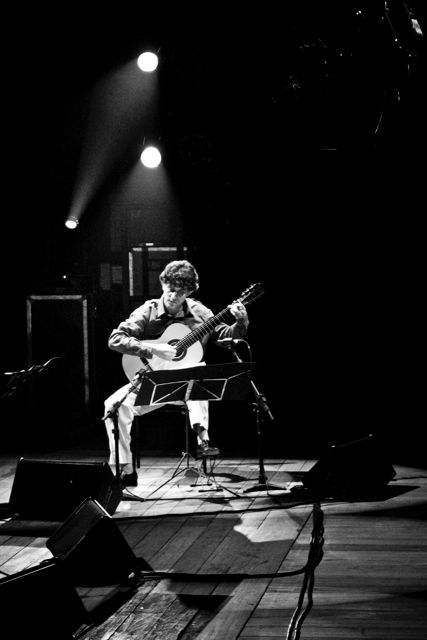